A few years ago, I was at The Allender Center rushing down a hallway at the end of an event. I was about to round the corner into an open area near the stairwell when a hand on my shoulder stopped me and a big sturdy body placed itself in front of me. It was my friend and colleague, Wendell Moss. At first, I was amused and thought he was being ornery and playful. I hit him on the shoulder and tried to get around him, but he shifted to keep himself in front of me. He stood facing me, and with his deep voice, he looked at me with a tender ferocity and said, “Sis, I need you to stop and look at me.”

I tried once more to get around him, but Wendell once again moved his body in front of me. He then put both his hands on my shoulders, brought his face close to mine, and said, “There is a man standing by the stairs who has been pacing in rage waiting for you. He wants you to see his contempt. He wants his angry, accusing face to be what you carry with you when you leave here, and I am not going to let that happen. You take a deep breath and look at me. My face is the last face I want you to remember when you leave here.”

I am a Japanese American woman. Wendell is a Black man. And the person waiting at the stairs was a white gentleman who earlier had been disrupted by the particularity of my face and was, indeed, irate with me. I stood there, now trembling, looking at my friend’s deeply kind, strong face until the angry man by the stairs left, and Wendell stepped aside.

I’ve experienced having my Asian face and body defended before, but that shielding has mostly been thin and broad, and it has almost always been with faces turned outward to confront issues and incidents. Wendell could have stepped between me and that man with his back toward me. I might have felt some measure of protection. But I would not have felt safe and seen. For 60 seconds, Wendell offered me his face in the presence of my enemy, and that minute transformed me. It is something my heart and body will never forget.

The mission of our institution is to serve God and neighbor through transforming relationships. Dr. J. Derek McNeil, the President of The Seattle School, recently wrote poignantly and passionately about his desire for us to become agents of change in the tending and mending of personal and collective trauma. He hoped that justice and mercy would extend into our relationships as well as our systems and structures.

We’ve been in deep reflective discussion as leaders at The Allender Center around how we want to address structures of white supremacy and racial injustice both individually and as a team. There is the pull to turn our faces outward only. There is advocacy in marching and protesting. There is necessity in bringing our voices and resources to expose what is evil, what is evil, what is broken. There is urgency to change oppressive systems and processes. But if we do all of that and do not have the vulnerability, humility, and courage to bring our faces before other faces that do not look like ours and have specific conversations of lament, repair, alliance, and hope, then we will have not done enough.

It is not lost on me that it was a police officer’s Asian face that turned away from George Floyd. That has brought a particular kind of grief and horror as I can’t help but see myself in that officer and my friend on the ground with a knee on his neck. I’ve read that the outward-facing officer was tasked to stand guard to defend his fellow police officer. I wonder if Tuo Thao could have turned his face toward George Floyd’s for even 60 seconds, if he would have seen the profound humanity of another man in the midst of those agonizing 8 minutes and 46 seconds, recognized something of the Imago Dei in himself and George Floyd, and been transformed to make a different choice.

I will work to dismantle systemic racism and speak out against oppression and injustice. I will address and engage issues of collective and racial trauma in my calling here at The Allender Center. And…I must bring my Japanese American face to the Black face of my friend Wendell and begin to name how I have colluded with white privilege and been complicit in perpetrating harm against him and his community. This is the transformative relational work of repentance and repair. 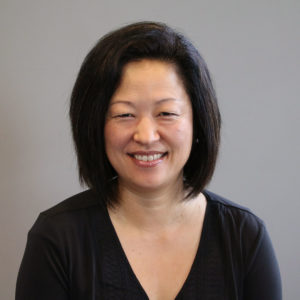 Jen Oyama Murphy is the Manager of Leadership Development and a Training & Pastoral Care Team member at The Allender Center. Jen is married to Joel Murphy and has two delightful daughters. Having recently become an empty nester, she is stepping into the adventure of her calling with greater courage and vulnerability. Her work with people alienated from honor and care has led her to contend with issues of race and gender with greater commitment and compassion. It is her honor to engage in stories of shame and harm with the hope of blessing.